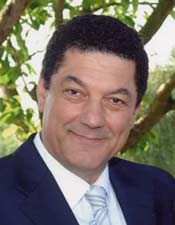 Georgian conservatory style is very similar to the Edwardian style - naturally we have both! These conservatories are characterised by lightness and airiness, with more subdued lines than the ornate Victorian style.

The Edwardian design offers the best of both worlds. . Impressive proportions within a simple rectangular design  ensuring furniture and internal fittings are easy to site and are more relaxing  to use. It has all the character of the Victorian while giving you more  space as there are no angle cuts on the corners.

Although the room is more functional, you still need to decide where to position any doors. Siting outside doors at the end or on one of the sides will make a major difference to daily useability. Think about moving freely around the furniture and to which part of the garden or patio you would like step out. Would you really like children to continually interrupt your guests at a dinner party due to poorly placed doors or would you prefer them to step adroitly to the side while guests enjoy the ambience of your conservatory in peace?

As with the Victorian style, a lantern roof can add extra flexibility - especially to a larger construction.

A plain gable-end on an Edwardian conservatory can create even simpler lines to blend with some modern building styles. The gable front conservatory retains  the single box structure of the Edwardian, but with a natural and graceful front elevation.

Floor to ceiling frames, dwarf walls - the design criteria can be varied to suit your tastes 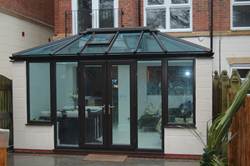 So what was Georgian architecture like? The Georgian period, which covered 1714 to 1830,  had highly symmetrical and proportionate architectural styles  that had their roots in the highly fashionable work of Andrea Palladio, a sixteenth-century Venetian architect. We can trace the symmetry and boldness of today's Georgian conservatory back to this Palladian style.

A Georgian conservatory style also pulls features from Greek and Roman architecture, as the Georgian period threw up many Greek and Roman ruins, the style of which the architects of the time were quick to copy.

Georgian conservatories  have grown in popularity in recent years Obviously, you can add your Georgian conservatory onto any style of building, but displays its very grand style best with existing Georgian architecture, typified by red-brick houses with white woodwork and white-stone cornices.